5 reasons James Franklin is the worst

The Nittany Lions coach has been called a ‘fraud’ and a ‘stooge.’ There’s plenty of evidence.

There never has been a more perfect match of head coach, program and fan base. Like the Nittany half-wits who pine for the restoration of Joe Paterno’s statue, Franklin is incredibly easy to root against.

Yes, Franklin guided Penn State to the 2016 Big Ten title after building Vanderbilt into a winner. Obviously, he is one heck of a recruiter. He owns a compelling personal story, too, having risen from humble beginnings and climbed the hard way up the sport’s coaching ladder.

There’s a reason, however, his peers voted him tied for college football’s most overrated coach; he could sell burgers to a vegan, but his game-coaching is all bun. And his clownish antics are exhausting. The biggest sports-media personalities in Philadelphia and New York — guys who make a living sucking up to successful coaches — have called him a “fraud” and a “stooge” in public.

1. He had to be restrained from going after a Penn State fan earlier this season.

After PSU lost to visiting Ohio State by one point thanks to the worst play call in the nation this season — a 4th-and-5 hand-off when Penn State’s quarterback was dominating the Buckeyes’ D — Franklin took a jab step toward a fan who politely expressed disappointment as the coach was walking off the field.

Franklin issued an apology for his reaction afterward, but then threw his players under the bus with an inane (obfuscating?) monologue about being elite vs. being great. Never mind that every 12-year-old from sea to shining sea knew 4th and 5 was a passing down. 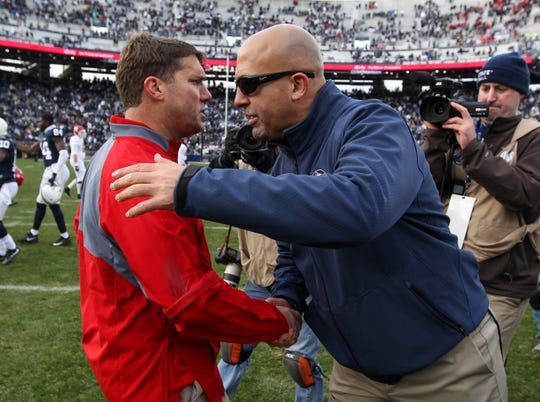 Was he trying to ice the kicker? Absolutely not, he said. He just wanted his kick-blocking unit out there.

Oh, that makes it better.

The esteemed John Feinstein said it “reeked of arrogance,” and Franklin backpedaled like a bad corner, saying he was taken out of context.

This season, Franklin challenged a lost fumble with his team throttling Pitt by 45 in the final minute.

Asked for his reaction afterward, Pitt coach Pat Narduzzi said, “That’s on them. You gotta sleep at night.” 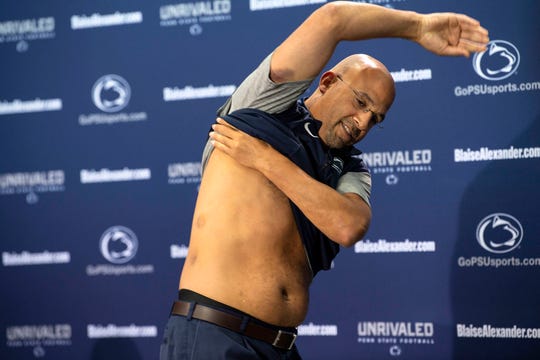 4. At Vanderbilt he chastised a recruit for flipping to Georgia, then flipped a bunch of guys on his way out the door to Penn State.

After defensive end Josh Dawson flipped from Vandy to Georgia in 2012, Franklin complained that recruits who decommit are not “men of integrity.”

Two years later, he signed nine flippers to his first recruiting class at Penn State — including five who defected with him from Vanderbilt.

“I go to sleep at night feeling really good about how we conduct our business,” Franklin said when asked about it.

5. Franklin once said he requires his assistants to have attractive wives.

“I’ve been saying it for a long time, I will not hire an assistant coach until I’ve seen his wife,” Franklin said in a 2012 radio interview while at Vanderbilt. “If she looks the part, and she’s a D-1 recruit, then you got a chance to get hired. That’s part of the deal.”

“There’s a very strong correlation between having the confidence, going up and talking to a woman, and being quick on your feet and having some personality and confidence and being fun and articulate, than it is walking into a high school and recruiting a kid and selling him,” he told Nashville’s 104.5 FM.

Ladies and gentlemen, I give you James Franklin.

Like making an ace quarterback hand off on 4th-and-5, you can’t make this stuff up.