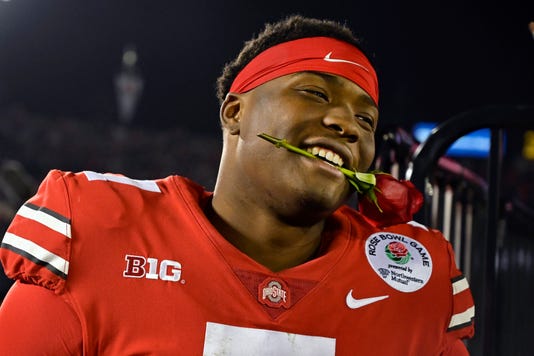 The Big Ten went 5-4 in bowl games after the 2018 season, including 2-1 on New Year’s Day, with Ohio State winning the Rose Bowl, the Granddaddy of them all, in Urban Meyer’s final game coaching the Buckeyes.

It wasn’t the most auspicious bowl season for the Big Ten with Michigan, Michigan State, Penn State and Purdue losing. Along with Ohio State, Iowa, Northwestern, Wisconsin and Minnesota were winners.

Here’s a look at how the Big Ten teams did in their bowl games:

The Buckeyes were in command of the Rose Bowl until Washington carved into the Buckeyes’ 25-point lead on New Year’s Day at the Rose Bowl. Ohio State recovered an onside kick to seal the win for Meyer, the 54-year-old coach who last month announced he’s retiring from coaching. Ryan Day is the new OSU head coach.

It was the first time Meyer had coached a Rose Bowl.

Dwayne Haskins, who could be leaving for the NFL, threw for 251 yards and three touchdowns in the 28-23 win for the fifth-ranked Buckeyes, who were Big Ten champions.

“I’m a very blessed man,” Meyer said after the game. “I love this group as much as any I’ve ever had.”

“Every week, every yard, every down, when we recruited these players, I just wanted to make sure that we made the great state of Ohio proud,” Meyer said. “And once again, we weren’t perfect, but we did a lot of good things.”

Meyer, who began the season serving a three-game suspension because of how he mishandled domestic-abuse allegations against former assistant Zach Smith, fired before the season, insists he is through coaching.

“He’s a really tough guy,” running back Mike Weber, a Detroit-native who rushed for 96 yards, told reporters. “Sometimes you never really know what he’s thinking. He really doesn’t show a lot of emotion, but I felt him today. You could tell he was giving his all. It felt a little different.”

The Wolverines had a 4-0 record against Florida heading into the Peach Bowl, but Michigan was lackluster and lost its third straight bowl game, this time, 41-15. Michigan has lost to Ohio State in the final regular-season game and the bowl game the last three years under coach Jim Harbaugh.

Michigan was without key starters — linebacker Devin Bush, defensive end Rashan Gary and running back Karan Higdon — who all opted to sit out the bowl to prepare for the NFL.

The Wolverines’ goal was to reach 11 wins for the season and potentially finish in the top five, but they finished 10-3. Michigan lost 62-39 to Ohio State and Harbaugh said the team was focused in bowl practices. Two defensive starters were injured early in the game, defensive end Kwity Paye and linebacker Devin Gil, who left with hamstring injuries.

It was an opportunity for Michigan to play some younger players. Christian Turner got time at running back and Andrew Stueber made a second start at right tackle in place of Juwann Bushell-Beatty who also decided to sit out the game.

Once again this season, the Spartans’ defense was solid and stifling while the offense was lackluster in the 7-6 loss to Oregon in the Redbox Bowl.

MSU gave up a touchdown pass in the fourth quarter – the Ducks crossed midfield only three times — and also had a botched field-goal attempt. It was the third time in four games MSU (7-6) did not score a touchdown.

More: Michigan State offense lost in a fog with no clear answers

The Spartans were going to attempt a 50-yard field goal when quarterback Brian Lewerke, the holder, bobbled the snap. He ran and then threw an incomplete pass.

“The ball kind of hit my hand on top of the ball,” Lewerke told reporters. “I tried to make something happen. That’s what happens.”

“You’re not going to win many games scoring six points,” he said.

Northwestern, the Big Ten West Division champ, finished the season 9-5 with a 31-20 victory over Utah in the Holiday Bowl. It was the Wildcats’ third-straight bowl victory.

During the third quarter, Northwestern converted three turnovers into 21 points during a nine-minute stretch in a hard downpour of rain.

Jared McGee went 82 yards on the second fumble for a touchdown.

“Did I think we were going to be able to create that amount of turnovers?” Wildcats’ coach Pat Fitzgerald told reporters. “I love San Diego but man I love it when it rains on game day. That was sweet because I think it played a really big factor. It was raining a little bit harder coming out of halftime than it was before the half and I think that played a role in the game.”

Senior quarterback Clayton Thorson became the Wildcats’ all-time leading passer with 10,731 career yards. This was his 53rd straight start and he threw for two touchdowns and had an interception.

The Hawkeyes might have negative yards rushing in the Outback Bowl, but they got the win, 27-22, over Mississippi State.

Iowa had 199 total yards but took advantage of three turnovers and converted to 17 points. The Hawkeyes running backs had 15 carries for four yards.

“We had a hard time blocking their front,” Iowa coach Kirk Ferentz told reporters. “Defense really bailed us out.”

The defense did come up big for the Hawkeyes. Safety Jake Gervase had an interception late in the game in the end zone and he also ended Mississippi State’s last drive at the Iowa 32 with 25 seconds left by batting down a fourth-down pass.

“Bowl games are a lot like early season games, where turnovers and penalties really factor in,” Ferentz told reporters. “If you aren’t on top of that part of your game because you haven’t played in a while, it can be a really tough thing. Obviously it helped us today being a little bit more opportunistic.”

The Nittany Lions finished 9-4 with a 27-24 victory to Kentucky in the Citrus Bowl.

Penn State quarterback Trace McSorley, playing with a foot injury, cut a 27-7 deficit to the three points. He threw for 246 yards and two touchdowns, and also rushed for a team-high 75 yards and one touchdown.

The nature of McSorley’s injury was never made clear. Doctors did clear him, but it was up to McSorley whether he felt he could play.

Jonathan Taylor not surprisingly was MVP of the Pinstripe Bowl, running for 205 yards and a touchdown in the Badgers’ 35-3 victory over Miami.

Taylor finished with 2,194 yards rushing and 16 touchdowns. The sophomore had long runs of 39 and 41 yards at Yankee Stadium. Wisconsin’s defense forced five turnovers.

There were high hopes for the Badgers entering this season, but they finished 8-5.

They were without quarterback Alex Hornibrook, who was recovering from a concussion, and Jack Coan got the start.

Taylor had 117 yards rushing at halftime enroute to his fifth 200-yard game this season, He joined Ron Dayne and Melvin Gordon as Wisconsin’s 2,000-yard rushers.

“The thing I’ve appreciated as much as anything is how he’s done it, the way that he works, the teammate that he is,” Wisconsin coach Paul Chryst told reporters.

It was a big bowl game performance for Minnesota’s Mohamed Ibrahim who ran for career-high 224 yards and two touchdowns in the Gophers’ 34-10 victory over Georgia Tech in the Quick Lane Bowl at Ford Field. Minnesota wrapped up the season 7-6 winning three of its last four games.

The 5-foot-10, 205-pound redshirt freshman Ibrahim came on strong toward the end of the season and gave the Golden Gophers a lift.

“He’s not the biggest, strongest or fastest,” coach P.J. Fleck told reporters. “This kid’s got more heart, passion, courage and plays the game the right way more than anybody I’ve ever met.”

Georgia Tech led the nation in rushing averaging 335 yards but was held to 206 yards.

The Boilermakers dropped under .500 to 6-7 after losing in a rout, 63-14, to Auburn in the Music City Bowl. They trailed 56-7 at halftime after the Tigers (8-5) scored touchdowns on their first eight possessions.

Auburn scored the most points by a Southeastern Conference team in a bowl, topping Alabama’s 61-6 win over Syracuse in the Orange Bowl on Jan. 1, 1953.

“That one snowballed faster than most,” Purdue coach Jeff Brohm told reporters. “I’ve been part of games that were a bad outcome, but that one happened fast. Credit to them, they made their breaks. Every little thing that went wrong seemed like it could. We got behind the eight-ball early.”