Free Press special writer Chris Nelsen spoke to Vernon Carey Jr., the No. 2 overall recruit in the 2019 class, who has MSU, Duke and UNC in his final three. Carey had 18 points and 10 boards in a season-opening win Nov. 27, 2018, in Davie, Fla.
Wochit 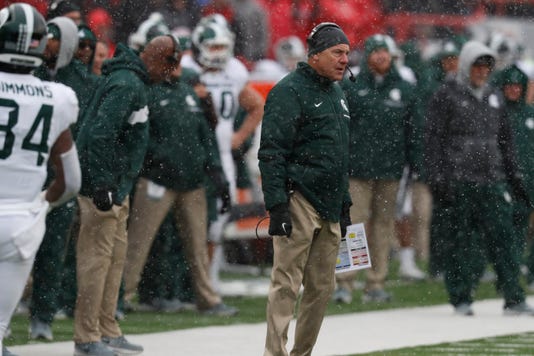 Michigan State head coach Mark Dantonio looks on during the second half of the Spartans’ 9-6 loss at Nebraska on Saturday.(Photo: Bruce Thorson / USA TODAY Sports)

It will be an interesting few days.

And most importantly, a one-week return of the Twitter-only mailbag. Largely because there are a lot of important and good questions being asked.

As always, you can send your weekly mailbag questions via email (csolari@freepress.com), on Twitter (@chrissolari) or join our weekly chat (11 a.m. most Thursdays) on www.freep.com. I take questions there and expound on a few in the Friday mailbag.

Where do you put the odds that we see some changes on the football teams offensive staff this season? – @BraydenHodges

There are tons of questions floating about whether Dantonio will make staff changes after the season. Folks like @SportsTalkLukey want to know whether Dave Warner will move on to another job like former MSU coordinator, Dan Roushar. Poster @UBDman believes the offensive line is the real problem and blames Warner’s co-offensive coordinator, Jim Bollman, and offensive line coach, Mark Staten, for the issues.

The numbers clearly point to an offense in regression from its record-smashing 2014 performance. That is not a small subset; that’s four years of data pointing to that. In both total offense and points per game.

However, let’s remember MSU began to employ more run-pass option plays in 2017 as a way to freshen the offense, and QB Brian Lewerke’s skillset helped guide that transition in 2017. The offensive line this fall was besieged with injuries, which started with left tackle Cole Chewins’ ailment and was followed by other starters getting hurt. LJ Scott’s injury two games into the season left MSU with two running backs (Connor Heyward and La’Darius Jefferson) who had not played the position full-time in high school. Then Lewerke got hurt and wasn’t the same after the Penn State game, at a point when MSU’s passing game had been carrying the offense. Then MSU lost Darrell Stewart Jr. for a few games, then Cody White for a month, then Felton Davis III for the final half of the season.

Those are the caveats, and certainly reasons why progression did not happen this season. There also is no doubt Dantonio is fiercely loyal to his assistants, and vice versa. Warner and Staten have been with Dantonio since they were at Cincinnati; Bollman joined in 2013 and coached alongside Dantonio with Nick Saban and Jim Tressel.

But Dantonio also knows this: The bottom line remains that a ball-control offense must produce touchdowns to be successful. Dominating the time of possession only limits the opportunities for your team when it struggles to make explosive plays and finish drives. I can see his hesitance to changing staff but would give it 50-50 odds that he does either make a staff move himself or someone leaves because of this reason.

What happened to the guy coaching Michigan State football who had every opposing coach on edge because he was fearless and unafraid to call a trick play at any time? I know Dave Warner takes a lot of flak, but is it possible he’s constrained by a suddenly conservative head coach? – @MitchBeeee

Too many people fixate on the trick plays and not the overall body of work. Dantonio always has taken a conservative offensive approach. That’s partly why and how the trick plays continue to work, with the timing and element of surprise coming within the constructs of the run-based offense when opponents have been lulled into a focus on stopping that.

To Dantonio, running the ball 40 times a game and having offensive balance breeds success with his system. A few weeks ago, he explained his philosophy like this: “We want to run the football, we need to run the football, I say that over and over every week and that’s what we have to do. When you look back in our history, to be successful, that’s what we’ve done. It’s what we will continue to push toward and we’ve got to be able to do that.”

Anyone who believes Dantonio will bring in someone steeped in spread passing offense is setting themselves up for disappointment. He said Saturday after narrowly beating Rutgers that scoring between 23-30 points is the point where “everybody’s happy” and allows flexibility for the defense.

But he also realizes MSU isn’t even averaging 20 a game this year (19.8 points).

How likely is the Outback Bowl? – @TheREDGodLeo

It seems like one of the Florida bowls — Outback or Gator — could be a likely landing spot because it has been so long since the Spartans went there. Before the ho-hum  Rutgers win, you could have made a case for MSU in the Citrus Bowl if Penn State got a New Year’s Six game along with Michigan and Ohio State (or if one was in the College Football Playoff).

More: Couch: For Michigan State’s sake, who to root for in the Big Ten football championship

I do still think Saturday’s Big Ten championship game will determine a lot for MSU in an ancillary way. If Northwestern wins, that blows up the Big Ten’s bowl slotting and likely leaves the conference out of the CFP again while preventing Penn State from a New Year’s Six game. If Ohio State wins but fails to impress and Oklahoma dominates Texas, the Big Ten champ could again be left out. And if the Buckeyes win in a romp, what happens with both the Nittany Lions and the West Division-champion Wildcats then will have a ripple effect.

That said, MSU still could land in a number of spots: The Outback in Tampa, the Gator in Jacksonville, the Music City Bowl in Nashville, the Pinstripe Bowl in New York or the Redbox Bowl in Santa Clara, California. I’m feeling less confident as of Friday that it will be one of the Florida games, but we should know for sure sometime Sunday afternoon.

MSU coach Tom Izzo wants his team to cut down on its turnovers, as the Spartans hit the road for Rutgers to open Big Ten play. Nov. 28, 2018.
Chris Solari, Detroit Free Press

Who do you think I should play at PG when (Cassius Winston) isn’t on the floor. Assuming everyone is healthy enough to play. –@WaxTomIzzo

Right now, there is no doubt it is Matt McQuaid – even if it doesn’t appear a viable long-term solution. The senior has the most experience at it, having played there some as a freshman before Winston’s arrival. He also does not panic with the ball, though there is a significant decrease in ball-handling from Winston.

More: Michigan State basketball vs. Rutgers: What to watch, prediction

And until Foster Loyer can catch up to the college game at the other end, non-wax Tom Izzo will err toward keeping a better defender on the court. This month is going to be very important for Loyer, and for Izzo to give him some minutes against lesser competition. That should help to see whether his defense can improve enough to not be a liability. The freshman’s point guard skills on offense, getting MSU in and out of sets, appears to be a better long-term fit than McQuaid this season, but only if Loyer is not a one-dimensional player. Defense will ultimately determine Loyer’s value at the Division I level.

The other options are Joshua Langford in a pinch, which would take away the ability to push tempo and remove the Spartans’ best runner on the wing, or possibly Xavier Tillman at the point-forward-type role he played in high school that I don’t think he is ready for in college. So McQuaid remains the most ideal of the four choices.

Who to root for, Northwestern or Ohio State?
IU basketball must curb turnovers as Big Ten season tips off