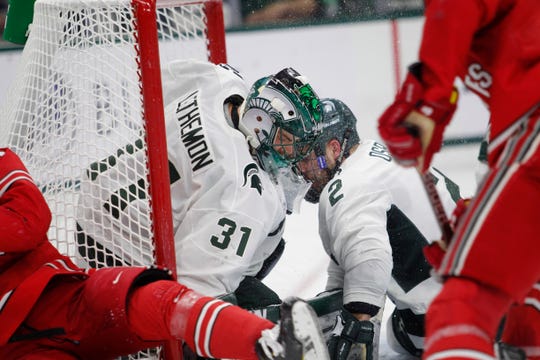 EAST LANSING – After four games in seven days – three of which went to overtime – the Michigan State hockey team got a full week of rest, practice and preparation as it heads to Penn State this weekend.

Pegula Ice Arena on Penn State’s campus has been anything but accommodating for the Spartans since it opened in 2013. MSU has gone 1-9 against the Nittany Lions in the arena, getting swept in three straight series and outscored by a total of 29-12.

It will be No. 10/11 Penn State’s first home series since Dec. 8, and it’s the Spartans first series in a true road setting since that same weekend when MSU was swept by Wisconsin.

MSU sits last in the Big Ten with 10 points, while Penn State is right above them in sixth with 14.

“It’s another great test on the road against another good offensive team,” MSU coach Danton Cole said. “They have guys that can get up and put pucks on net and do a good job of generating speed coming into the offensive zone. They attack, find space, and put pucks on the net. That’s their mentality, and they’re hard to play against.”

MSU’s Taro Hirose, after notching three points against Ohio State last weekend, has jumped to the top of the NCAA leaderboard in total points with 31. His 22 assists also lead the country.

The two players directly behind Hirose will both be on the ice this weekend against him. Penn State sophomore forwards Alex Limoges (30 points) and Evan Barratt (29 points) lead the way on one of the most high-octane offenses in the country.

“I want to be the best player,” Hirose said. “They are some of the best players in the country so it will be a good test to prove to myself that I am better than those guys. So there’s some internal, personal competition for me, but definitely more worried about our team going out and playing well.”

Penn State has scored 99 goals this season – 36 more than the next closest team in the Big Ten. MSU, meanwhile is second to last in the conference with only 54 goals and has given up 70 goals, the second most in the Big Ten behind Penn State’s 73 allowed.

Penn State forwards Liam Folkes and Brandon Biro have 22 points apiece, good enough for a 16th-place tie among NCAA point leaders. MSU’s next on the list is junior forward Patrick Khodorenko at 21 points, which ties for 22nd.

Folkes, Limoges, and Barratt comprise the highest scoring offensive line in the nation. MSU’s first line of Hirose, Khodorenko and sophomore Mitch Lewandowski know they have their hands full.

“It’s about taking away chances, playing physical on them,” Lewandowski said. “Most teams that are really offensive don’t like to be hit, so we need to be physical and not give them a lot of time and space.”

Shoring up the blue line

Last weekend was one to forget for MSU on the defensive side, allowing seven goals in last Friday’s thrilling 8-7 overtime victory over Ohio State, followed up by a 6-0 loss to the Buckeyes on Saturday.

If MSU has any shot to take home some points this weekend, it’ll start with tightening up  in an effort to slow down the Nittany Lions. 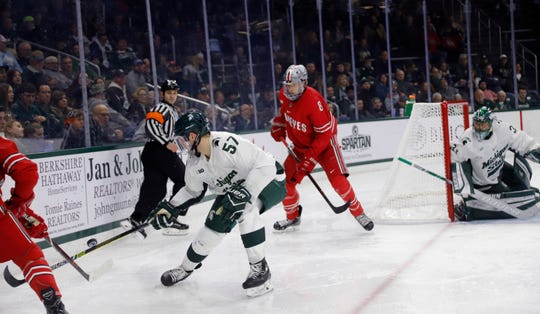 “They’re very aggressive and they shoot from everywhere,” MSU junior defenseman Jerad Rosburg said. “They’re not always shooting to score but shooting to create havoc in front of the net and get rebounds to pop out into good scoring areas.”

Rosburg, one of MSU’s two upperclassmen on the back line, echoed Lewandowski’s sentiment that physicality is going to be a key for the Spartans.

“I’ve always liked the physicality part of hockey, and the older you get you get a little stronger and gain confidence and figure it out more,” Rosburg said. “I think it’ll be really important to be the ones who bring the physicality to the game, and I enjoy doing it and it’s a useful tactic to get guys off their game.”

Related: Couch: MSU’s Cassius Winston, Matt McQuaid and the commitment to winning above self