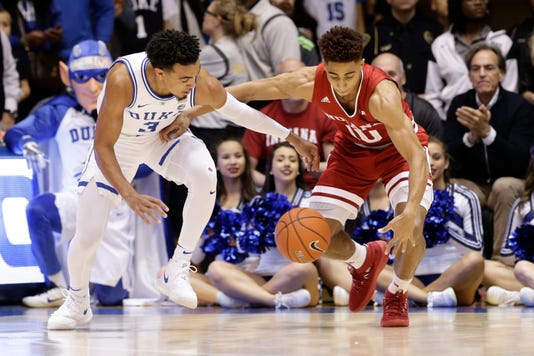 BLOOMINGTON – For all of his sideline passion, IU coach Archie Miller has rarely been one for postgame news conference histrionics.

So it was only through slight headshakes and subdued half-pauses that Miller expressed physically his displeasure at the ball control issues that — as much as any one thing — submarined his team in a 90-69 humbling at Duke earlier this week.

“We have to get better at handling the ball,” Miller said postgame Tuesday, after his team committed 20 turnovers. “You cannot play turning the ball over like that.”

Subscribe: Get more Hoosiers news for this special introductory price

Insider: What kind of player IU is getting in Trayce Jackson-Davis

Miller was referring there to the Hoosiers’ performance in Durham specifically, but Indiana’s turnover problem neither began Tuesday night, nor looks likely to be confined to road trips against top-five teams. 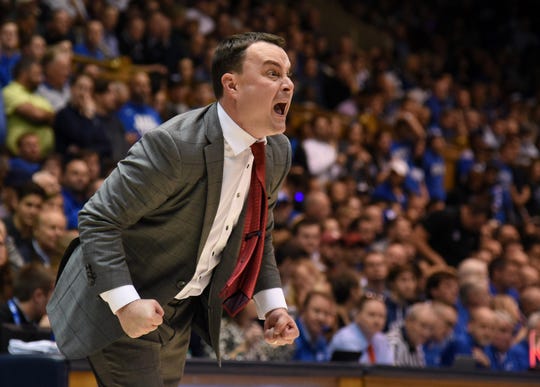 Through seven games this season, Indiana is turning the ball over on 21.4 percent of possessions, a number that according to Ken Pomeroy’s numbers ranks the Hoosiers outside the nation’s top 250 programs in that statistic.

That’s up from a respectable, middle-of-the-road 18.2 percent a season ago.

“We’re turning the ball over too much. It’s our biggest Achilles’ heel,” Miller said Friday.

It’s attributable in part to youth, but doesn’t stop there. And while it probably cost the Hoosiers a chance at least at competitiveness during their midweek trip to Tobacco Road, that carelessness exacted a greater price nine days earlier in Arkansas, where 18 turnovers in a one-point loss likely cost IU an early season road win.

“It’s not just one guy right now,” Miller said Tuesday. “We have to take a step back and look and see if we can put some guys in some better position. That’s on us as a staff. As a coach, you have to put your guys in better positions to be successful. We have to do that moving forward.” 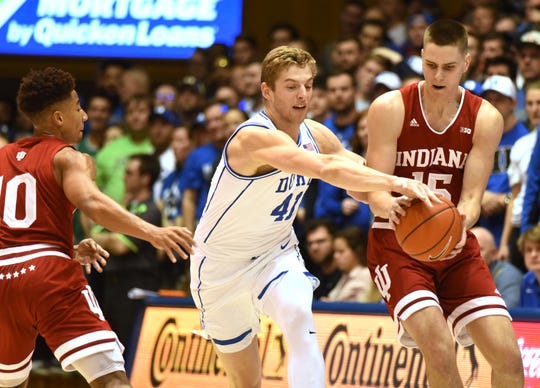 In Durham, Indiana (5-2) got in trouble early, amid the chaos of Cameron Indoor Stadium and against a Duke zone press it had prepared for but did not handle well.

No one was immune, and the problems persisted even after Duke relieved its pressure. IU committed 13 first-half turnovers. Eight Hoosiers committed at least one giveaway, and six of those eight finished with two or more.

The Blue Devils scored 28 points directly off of Indiana’s carelessness.

“When one happened, I think we didn’t do a good job of just rallying together and moving on to the next one, to make sure it didn’t happen again,” said Juwan Morgan, who finished the Duke game with two turnovers and was also saddled with early foul trouble. “In this type of place, in this type of atmosphere, you can’t stack bad plays. I think when you have a bad play, you have to just stop right there, put a period on that sentence and keep moving forward.”

That specifically felt reflective of Indiana’s relative youth. Duke played young but with as many as four first-round picks in its starting lineup. IU played young (seven of 12 Hoosiers to log minutes Tuesday were freshmen or sophomores), looked like they’d been rattled by their start and struggled to recover. 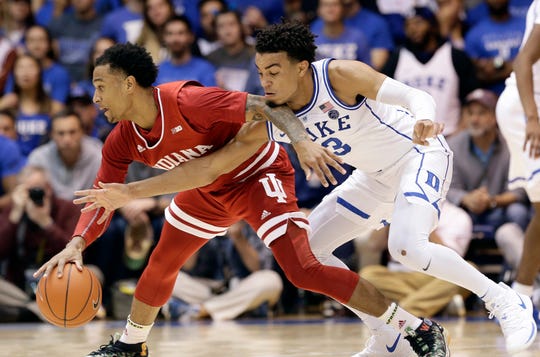 It was reminiscent of Arkansas, when the Razorbacks’ high-pressure style forced 18 turnovers in a game that likely would have swung the other way, had the Hoosiers held onto the ball.

“We’ve just got to have better concentration like (Morgan) said,” sophomore guard Al Durham said Tuesday. “Taking care of the ball, we’ve got to (put) more emphasis on that.”

Now’s the time for that renewed emphasis, with the schedule toughening up before the holidays.

Indiana opens Big Ten play Saturday at home against Northwestern, then travels to Penn State — the Nittany Lions fresh from an upset win against Virginia Tech — next Tuesday. The Hoosiers will follow that with a home game against Louisville, which just beat Michigan State, and then its biannual Crossroads Classic meeting with Butler.

IU’s next four will likely prove a better gauge of the Hoosiers’ potential, and realistic ambitions, heading into the new year. Both of those will pivot, for better or worse, on the Hoosiers’ ball security.

Sign up: Get the latest IU hoops news delivered to your inbox