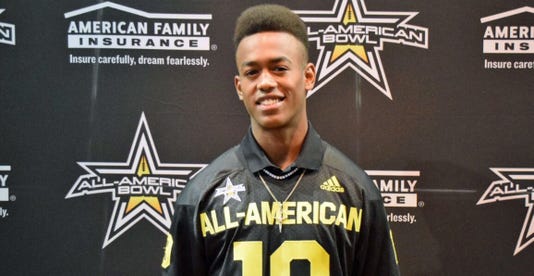 As Michigan looks to wind down 2019 recruiting, the possibility of adding one more wide receiver to the class remains.

Round Rock (Texas) Cedar Ridge’s Jaylen Ellis and Greenwich (Conn.) Brunswick School’s Cornelius Johnson are two the Wolverines are recruiting at that position.

Ellis, a Baylor commit, took an official visit with Michigan in September and will take an official visit to Tennessee this coming weekend. While it is not certain he will end up a Wolverine, the chances appear to be increasing that he could sign with a school other than Baylor.

Johnson is something Michigan does not have in the class yet, and that is a bigger-framed wideout; he is 6-foot-3 and 195 pounds. He camped at Michigan the summer before his junior season, then received an offer from the Wolverines the following spring, making a visit to campus shortly thereafter.

Johnson’s mother is from Detroit and graduated from Michigan’s medical school. They still have family in the state of Michigan.

“I really like the staff,” Johnson said in the summer. “I like the facilities too; they’re crazy and amazing. … But that’s who you’re going to be around the most, the coaches, who I like a lot.”

Johnson just finished an official visit with Penn State, which is considered one of the primary competitors. His top five also includes Alabama, Stanford and Notre Dame.

Initially, Johnson had planned to bypass the early signing period in order to sign on February’s National Signing Day, but he recently told 247Sports’ Steve Wiltfong that he was now going to sign on Dec. 19.

Johnson will play in January’s All-American Bowl in San Antonio, Texas. He is rated a four-star prospect by the 247Sports Composite.

Crystal Lake (Ill.) South’s Trevor Keegan will announce his college decision on Friday at 7:30 p.m. ET at his school.

Keegan is fresh off an official visit to Penn State. Michigan and the Nittany Lions are joined by Georgia in his final three. He has taken officials to all three schools this year.

The 6-foot-6, 310-pound offensive tackle also took an unofficial visit to Michigan for a practice last month. He visited Ann Arbor for the BBQ at the Big House in the summer, as well, and the Wolverine staff has been to his school numerous times during the allotted recruiting periods.

Offensive line remains a position where Michigan will bring in at least one more recruit. In addition to Keegan, Kansas City (Mo.) Rockhurst’s Danielson Ike, and IMG Academy’s Chris Akporoghene, a Tennessee commit who took an official visit to Michigan last weekend, remain as potential options, as well.

UM reaches out to Rutgers commit

In the wake of running back Eric Gray’s de-commitment from Michigan, both The Michigan Insider’s Steve Lorenz and 247Sports’ Bill Greene have reported that the Wolverines have inquired about Warren (Ohio) Harding tailback Kay’Ron Adams, who is committed to Rutgers.

Michigan has not yet offered a scholarship, but have contacted Harding head coach Steve Arnold about Adams.

Iowa offered Adams on Monday, and the Hawkeyes are set to receive an official visit from him this weekend.

The Wolverines have a history at Warren Harding with Mario Manningham and Prescott Burgess among the notable Harding alums who played in Ann Arbor.

Allen Trieu covers Midwest football recruiting for 247Sports. He has been featured on the Big Ten Network on its annual Signing Day Show. His Michigan and Michigan State recruiting columns appear weekly at detroitnews.com.