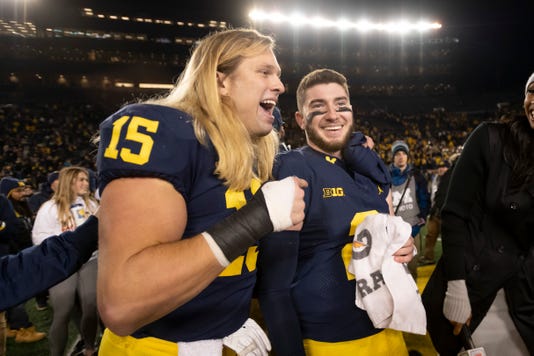 Ann Arbor — So this “revenge tour” thing that Michigan defensive end Chase Winovich coined during a television interview after the Wolverines beat Wisconsin has some serious legs.

Michigan has avenged losses to Wisconsin and Michigan State so far this year and added a bludgeoning of Penn State on Saturday at Michigan Stadium, 42-7. The fifth-ranked Wolverines are 8-1, 6-0 in the Big Ten and sit firmly atop the East Division standings.

They had talked for the last two weeks — they were off last Saturday — about how much they felt “disrespected” during Penn State’s 42-13 rout last year that included the Nittany Lions attempting to pile on in the final seconds.

“Every week we take every game personally,” said quarterback Shea Patterson, who transferred from Ole Miss last December. “I wasn’t part of the team last year and I understood Penn State ran up the score last year.

“Our mindset was to come out here and play the best game and if we had the chance, we were going to run it up, too.”

“(And) we want our lunch money back,” Winovich said after the game. “They bullied us last year, they ran the score up with five seconds left. They were laughing. It was a jolly time. I say this in the most respectful way possible, I’d probably do the same thing if I was a coach. No hate.

“I knew we wanted our lunch money back. We wanted them to pay interest, and it looks like banks are closed on Sundays, but we’ve got some deposits to make.”

More: Wojo: Wolverines are on a no-mercy mission

Michigan stomped and stomped and pushed around Penn State, which avoided a shutout with 1:59 left when backup quarterback Tommy Stevens scored on an eight-yard run. The Nittany Lions drop to 6-3, 3-3 Big Ten. They entered the game averaging 459.5 yards a game and were stifled by a defense and defensive coordinator Don Brown, who took last year’s loss especially hard.

UM running back Karan Higdon said it was “personal from the start” against Penn State
Angelique S. Chengelis, The Detroit News

“This one was definitely personal knowing that they tried to score at the end of the game last year,” running back Karan Higdon said. “Our defense, when they got that touchdown, they were pissed. That just shows how personal this game really was. We wanted to shut them out.”

Penn State had not been shut out since Michigan won 20-0 at Beaver Stadium in 2001.

The Wolverines have held eight of nine opponents this season to under their offensive average. Penn State had 186 yards, including 68 rushing and went 2-for-11 on third down.

“I sensed them wearing out from the first series,” Winovich said.

Patterson was 11-of-17 for 144 yards and two touchdowns, a 23-yarder to Donovan Peoples-Jones and a seven-yard pass to tight end Zach Gentry. He also ran for 42 yards on 11 carries and scored on a one-yard run. Running back Karan Higdon rushed for 132 yards on 20 carries and a touchdown. This was his seventh straight 100-yard rushing game and is one 100-yard performance from tying Mike Hart’s record set in 2007.

After going three-and-out on back-to-back drives to start the second half, Michigan built a 21-0 lead on a gut-check drive that started on the Wolverines’ 10-yard line.

Critical third-down conversions kept the drive going, first on a 19-yard run by Higdon on third-and-3 and then on a 24-yard pass from Patterson to Chris Evans for 24 yards on third-and-7. Patterson faked to Higdon and found tight end Zach Gentry in the end zone on a seven-yard pass. Michigan went 90 yards on 13 plays and used 7:05.

“It was a play we’ve had since the start of the season,” Patterson said. “Zach did a great job of winning that one-on one matchup. It gave me a clear throwing lane.”

Michigan quickly increased the lead to 28-0 when Watson picked off backup quarterback Tommy Stevens and returned it 62 yards for a touchdown. It was his second pick-six of the season among his three interceptions.

The Wolverines led 14-0 after dominating the first half, marking the first time this season Penn State has been shut out. Michigan had 212 total yards, including 115 rushing and were 4-of-8 on third down. They entered the game seventh nationally in time of possession and had the ball 19:31, while Penn State ran only 24 plays in its 10:29.

Penn State starting quarterback Trace McScorley, who was 5-of-13 for 83 yards, was sacked four times, including two by Josh Uche — who had two sacks in the Michigan State game — and now leads the team with seven.