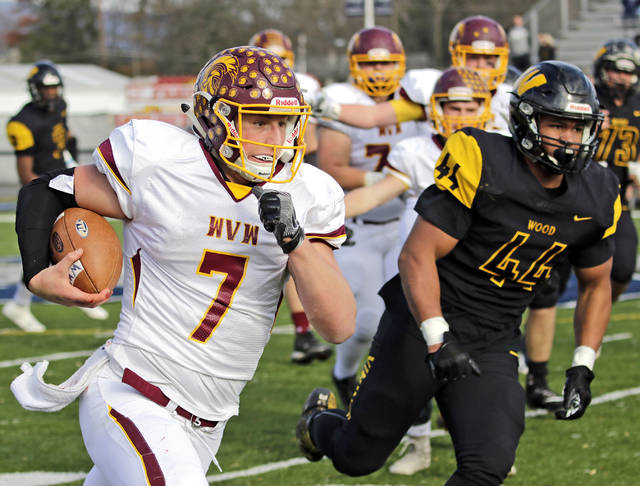 Wyoming Valley West alum Rob Dwyer, who played this past season at Wyoming Seminary as a post-grad, plans to head to Penn State as a walk-on for the football team. – Bill Tarutis file photo | For Times Leader

For the second time in a week, a local football standout has accepted a walk-on invitation from Penn State.

Former Wyoming Valley West quarterback Rob Dwyer, who played a post-graduate season this fall at Wyoming Seminary, announced Sunday night that he would be joining the Nittany Lions as a preferred walk-on.

He joins Hanover Area’s Justin Kopko, who also said recently he will head to Happy Valley to suit up for the Lions.

“I want to start off by thanking my family for doing everything they can for me, and getting me where I am today,” Dwyer wrote on Twitter. “I would also like to thank (Valley West coach Pat) Keating, (Seminary coach Jim) Anderson and (Penn State letterman and Holy Redeemer coach Dwayne) Downing for all the help they have given me throughout this long process.

“I have been thinking very hard about what I want to do, and where I want to be in the classroom and on the football field. With all that being said, I am very excited to announce my commitment to Penn State University! We Are!”

Dwyer has shown his versatility throughout his career on local fields, playing quarterback and safety for Keating at Valley West, helping the Spartans win the District 2 Class 5A title as a senior, going on to win the three-district subregional.

He also played both sides of the ball for the Blue Knights this past season, standing out as a safety with a linebacker’s build at 6-foot-2, 225 pounds.

Penn State had three Wyoming Valley Conference alums on its roster in 2018, all from Lake-Lehman — starting guard Connor McGovern and a pair of walk-ons in running back Nick Eury and lineman Kaleb Konigus.

Wyoming Valley West alum Rob Dwyer, who played this past season at Wyoming Seminary as a post-grad, plans to head to Penn State as a walk-on for the football team.