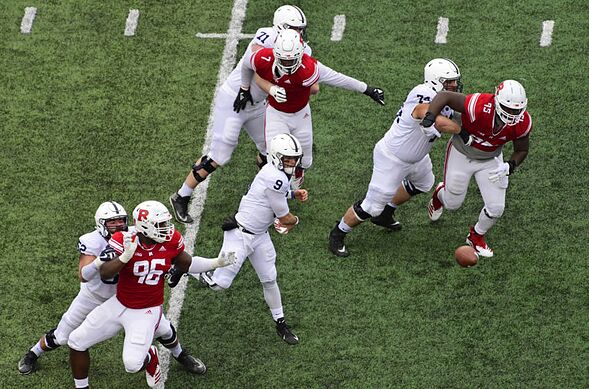 Penn State football beat Rutgers 20-7 at High Point Solutions Stadium on Saturday to move to 8-3 on the 2018 season.

It wasn’t pretty by any means, but Penn State football got the win against Rutgers on the road on Saturday. The Nittany Lions scored only 20 points, which is their third lowest total for game this season.

These 20 points came off a measly 322 total yards for the Penn State offense against a team that was allowing 418 yards allowed per game going in. Rutgers only has one win this season, and the Nittany Lions surely didn’t play like it.

The struggles on offense started with Trace McSorley’s inaccuracy due to his injured right knee that seems to be constantly nagging him. However, the offensive line didn’t help the cause in terms of moving the ball, as Penn State was only able to run for 3.6 yards per carry in this game.

On defense, Penn State was solid, as they only allowed 46 passing yards on five completions for the entire game. They also only allowed 3.4 yards per carry to Rutgers, and forced three turnovers.

Overall, this wasn’t the performance that Penn State fans wanted to see, but the Nittany Lions still came out with a win, and got some help from around the nation in terms of a potential New Years’ Six Bowl. With a Syracuse loss and West Virginia loss, Penn State’s road to a third-consecutive New Years’ Six Bowl got a lot easier.

Next, James Franklin will have the task of getting his team ready for a hungry Maryland team that only lost by one-point to Ohio State, 52-51.